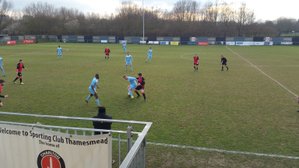 MVP backed up their fine midweek display with another excellent performance against Seven Acre & Sidcup. On paper this fixture looked very tough and the sky blues had to be on their mettle. They were and some !!! On to the action

As is customary in most close matches like this the game really didn’t flow for the first’s part. However it was MVP’s Ben Ashton who was called into action early doors making an excellent save from a low shot…..This spurred MVP into life and shortly after this scare we took the lead. Dominic Elmes controlled a cross moved the ball to his right and thundered in a terrific opener for the sky blues 1-0.

MVP almost doubled their lead when James Hawkins sent a lovely cross into the box for Tommy Leggett to have his header well saved by the Acre keeper. We then had another close when the home sides Fenech found some space at the far post. He seemed destined to score only for Nathanial Ward to block the shot superbly. Then Ashton had to save smartly again this time by Acres other ace striker Patrick. Real determined defensive work keeping them at bay.

Nathanial Ward was again excellent defensively this time thwarting Fenech again at the far post with a great headed clearance which saved a certain goal for the Acre!!!.

Ward was involved again but this time offensively.He travelled forward unchallenged and hit a corner from 30 yards which hit the underside of the bar and bounced out. It would of been a fitting reward for his first half endeavours. Further chances fell to Adrian Brown who miscontrolled a far post cross and Leggett who just couldn’t reach another excellent Hawkins cross.

MVP came out the traps well and were soon on the front foot. We increased our lead when following a surging run and shot by Hawkins. His effort was palmed out by the keeper to the waiting Leggatt who pounced on the loose ball and fired home no 2.

Acre were to reply swiftly though Patrick sprung the offside trap to race away and finish smartly past Ashton for 2-1. Our hosts were to enjoy their best spell of the match now as they laid temporary seige to the MVP goal. Patrick had two good efforts both wide of the mark. They struck the MVP post when Cullen (possibly) hit a daisycutter. Then Fenech followed up with a rasper that Ashton turned over the bar.
Arguably, their best chance at an equaliser fell to Fenech who again found space he was one on one with Ashton. However, the keeper made a terrific tackle MVP then managing to clear their lines.
Having weathered the storm it was the sky blues who were to find the net again. Grant Brown sending in a lovely cross into the Acre box…the only player who seemingly reacted was skipper Elmes who cooly volleyed home his second goal to put us 3-1 ahead.

MVP continued to press home their advantage. Leggatt dragging a shot wide when well placed..Acres chief tormentor Hawkins who was a constant thorn in their side going at the defence at every opportunity. It was Hawkins fittingly who notched our fourth of the afternoon. This time from a sumptous free kick which went in off the left hand post for 4-1.

Acre managed a late consolation when Tompkins fired home through a crowded goalmouth. But not before further efforts from G Brown and Hawkins almost gave MVP a five goal haul.
An entertain game was then brought to an end and MVP were victorious.

All in all a superb performance all round by the Sky Blues. Ashton in goal was excellent, making some terrific saves and showing bravery in coming out for the ball. Atkins at CB bit of an unsung hero won nearly every ball contested.. Skipper Elmes gave a typical all action display and scoring two great goals. But this week’s MOM goes to Hawkins who was simply sublime. His all action performance would get him the league team of the week for sure (if they had one…)

Dimmo, Toddy, & Jonesy again got this one right on the money with their selection. MVP showed a decent mix of defensive steel coupled with oodles of attacking prowess..

Next up we make the 1000 miles round trip to face Sheppey United who sit near the summit. On this form who knows the Sky Blues might just cause a surprise.