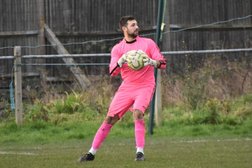 Meridian travelled to the Ladywell Arena to face Forest Hill Park in the Quarter-Finals of the London Senior Trophy. Meridian had made three new signings in Tyrell Brown, Sayoum Parks, Aaron Agyeman and Chevy Hart and all four were in the starting line up. Another new player Emmanuel Quarshie also made an appearance as a second half substitute. Unfortunately Park’s Ollie Milton scored the only goal of the game from the spot in the 55th minute.

Assistant manager Sean Boothe stated after the game: “Forest Hill scored following a harsh penalty decision for an accidental hand ball. It was very much a game of two halves where MVP didn’t capitalise on their first half dominance. Lots of positives to take from the game.”