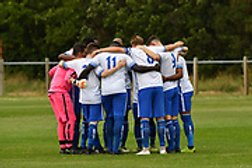 Meridian VP’s hopes of a positive start to the season was dashed by a smash and grab from Snodland after a dominant second half display didn’t get the result the home side’s performance deserved.

To Snodland’s credit they started the brighter of the two sides putting Keeper Ben Ashton’s goal under pressure in an early flurry of chances. Once Meridian got into their stride and settled into the game, they began to dominate possession and create chances themselves. Around the half hour mark the home side even had the ball in the net but Brima Daramy was adjudged to be offside.

Snodland’s centre forward missed a header from point blank range, was denied by the finger tips of Ben Ashton and their winger had a volley from the edge of the area go just wide. For Meridian, Gideon Acheampong went on a lung busting run and put in a superb cross but no one could capitalise. Douane West had a couple half chances which the Snodland Keeper dealt with comfortably.

The second half saw the home side come out with much more purpose and vigour which put them in total control. Gideon Acheampong and Harvey Brinkley we’re getting far more of the ball as the midfield of Tim Mofatt, Micah Banton and Joe Richardson began to stamp their authority on the game. Our back three of Michael Ade, Martin Begg and Dan Akintimehin stood resolute and marshalled the defence expertly which gave the home side a springboard in which to start their attacks.

Wave on wave of attacks saw Meridian go close on numerous occasions. Brima Daramy was replaced by Scott Taylor after 52 minutes and that added an injection of pace which troubled Snodland’s back line. Their keeper made two excellent stops before Douane West missed the chance of the game having been put through one on one to blast his shot over the bar.

The next change saw Micah Banton replaced by Brandon Hobbs in the 70th minute which again put us on the front foot, but then the sucker punch came when the Snodland forward Hutton found space in the box to control before clinically finishing into the bottom left corner in the 80th minute.

The goal added urgency to Meridian’s game but after an enforced change in the 84th minute with Dan Akintimehin having to be replaced with Tomi Alade, the home side conceded again as a long run from the Snodland midfielder Kennedy was not closed down enabling him to drive in the second from distance.

Harvey Brinkley scored in the 87th minute direct from a corner to hand Meridian a life line, but with only 2 minutes of stoppages the home side simply ran out of time. Lots of positives can be taken from the performance but there is now a two week wait to rectify and get those first points on the board.

We would like to thank all of the supporters that came down to watch our first home game which we hope you enjoyed and a crowd of 70 was testament to that and with your help we look forward to continue to grow this game by game..

Next Fixture Away to Kent Football United 17th August 2019 KO 3PM, Come support the MVP and the lads!