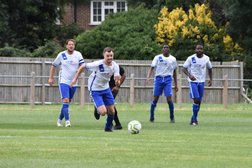 Meridian VP reacted well to their opening day defeat by putting Kent Football United to the sword at Glentworth Sport Club with some clinical finishing. With new signings Trey Small making his full debut and Jacob Skelly being named on the bench the squad is beginning to take shape.

The opening 20 minutes saw quite an even affair with no real attacking threat as both teams got into good areas but without any serious efforts on goal. Meridian just edged it possession wise as they did attempt to string a sequence of passes together as the home side took a more direct approach. Both defences stood firm in the early exchanges.

The home side came closest to opening the scoring with a free kick that hit the bar. The opening goal, which came from a quality cross from Scott Taylor saw MVP Captain Tim Moffatt ghost in at the far post with a close range header after 40 minutes. This goal was closely followed by a deft header from Douane West from another cross, this time from Harvey Brinkley on the stroke of half time.

Kent Football United came out fighting in the second half and really took the game to Meridian VP with a great opportunity within two minutes of the restart. An excellent floated free kick into the area saw a home side attacker run into the far post area, control but then somehow put his shot wide of the post. This gave the home side all the encouragement they needed to pull a goal back within 5 minutes. A straight ball from the back wasn’t dealt with by the Meridian defence and James Owalabi finished well in the 49th minute.

Scott Taylor was replaced by Jerome Richards whose pace instantly caused panic down the left wing. Joe Richardson struggled to shake a knock to the hip and was replaced by debutant Jacob Skelly who instantly made his presence felt with a blockbuster tackle and a rasping drive from 35 yards that stung the palms of the home goalkeeper.

The defining moment of the game came after about 75 minutes when a Kent Football United forward broke free from Meridian defence to face Ben Ashton one on one. The forward struck a firm shot that was heading for the corner, but Ashton pulled off a world-class save to palm the ball wide of the post to prevent an equaliser.

This wake-up call stirred Meridian into action again and the third goal came in the 82nd minute from another excellent delivery from Harvey Brinkley from a free kick. As the ball was curled into a dangerous area, Douane West rose to power his header past the keeper for his second of the game.

Brima Daramy was introduced late on to replace Trey Small and he made his presence known winning a penalty after dispossessing the Centre half who then dragged Daramy down to face his marching orders as last man and preventing a clear goal scoring opportunity. Douane West stepped up to complete his hat-rick with virtually the last kick of the game.

This moral boosting victory set Meridian up for an important Bank Holiday weekend which sees an away trip to Lydd Town on Saturday then a massive Derby day on the Monday at home to Bridon Ropes.