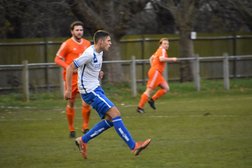 A point snatched from the jaws of defeat..

Meridian snatched a point from the jaws of defeat after a last minute equaliser gave them something from a game, in hindsight they should of won. After an extremely poor start to the game which saw Stansfeld take a 2-0 lead after goals in the 5th and 12th minutes, Meridian grew into and began to dominate the game.

The game seemed to bypass the Meridian midfield as Stansfeld were very direct in playing into their tall forwards and supporting. Jacob Skelly, who was initially given a more advanced role, was then asked to drop deeper to win headers and get to grips of the midfield with Joe Richardson. Ironically, in the 37th minute Captain Skelly was in the most advanced position, when Nick Chan played a wonderful through ball for him to score his 5th goal of the season with a bullet header.

Meridian continued to press the Stansfeld rearguard into mistakes and Adrian Spence was unlucky with a lob that just went over the bar. Soon after saw a fingertip save from the Stansfeld keeper onto the angle of crossbar and post from a 30 yard drive from dangerous Jacob Skelly. The half time whistle could not of come quick enough for the visitors.

Second half saw the home side come out with a lot more hunger and desire, which saw them again have the lion share of possession. Stansfeld were on the ropes but were stubborn and dogged in hanging onto their lead. With some tough tackles flying in, the game was still played in the right spirit with players on both sides showing desire and determination.

Adrian Spence again went close when he controlled and fired a volley just wide from the edge of the box. In the 75th minute Brima Daramy entered the fray replacing Adrian Spence and soon after saw Alfie Collins come on for Nick Chan. Alfie Leach was then bizarrely sin binned for a shoulder barge and querying the decision. Stansfeld also had a player sin binned not too long after that. Collins Ugochukwu got a whack on his head which left him blooded but he was able to continue.

Meridian VP got the deserved equaliser as a tackle on Gideon Acheampong on the half way line was deemed a foul by the referee. Another quality delivery from Abbas Oduncu saw Jacob Skelly rise to head hone his second of the game to secure well deserved point.