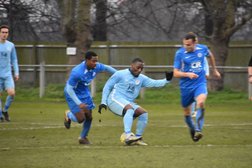 Meridian VP won this South East London Derby to maintain bragging rights after also winning the last Derby earlier in the season 3-2. In another tense, scrappy affair, Meridian showed the required quality to edge the encounter at the death.

Meridian VP had two debutants in Owain Hoskins at centre-back and the experienced Gavin Quintyre on the left side of midfield. Also on the bench was the returning RJ Pingling who had been out for nearly two months after injuring his ankle on his debut versus Greenways.

There was an edginess to Meridian’s play in the opening exchanges with a lot of rushed, misplaced passes all around the park. Bridon Ropes seemed more assured in their work but the away side were standing firm. Meridian then began to grow into the game and were starting to find Gavin Quintyre on the left side. This was creating space for Meridian down the right which was not being exploited and was making it easier for the home side to contain.

Jermiele Johnson began to find pockets of space and his runs at the heart of the Bridon defence started to pose them real concerns. Meridian broke the deadlock in the 20th minute when a ball out wide to Quintyre saw him play a clever ball through his opponent’s legs for Paul Hayes to latch onto and drive a left footed shot across the keeper, who got a hand to, but couldn’t keep out of the net. This was the striker’s 3rd goal in 3 games.

Meridian kept the pressure on and saw further chances from Paul Hayes, Jacob Skelly and Owain Hoskins go amiss. Bridon then scored against the run of play when a quick counter found Sam Cassell on the edge of the box to let fly a slightly scuffed shot that nestled in the corner of the net. Bridon then hit the post in another swift counter just before the break.

The second half had the same quick tempo as the first but the home side seemed to have grown into the game more and more. Meridian’s back line stayed a bit more rigid and close together to make them difficult to break down. Bridon attempted to attack down the left but Collins Ugochukwu was resolute in his defending with the Outstanding Owain Hoskins on the cover. Young Alfie Leach put in another mature performance of good decision making and aggressive tackling when called upon.

The game required all the experience that Meridian had in the ranks to weather the determined onslaught from Bridon. In the 65th minute, RJ Pingling was sent on to replace Adrian Spence as the supporting forward. He got involved instantly with a few runs on the left which were well marshalled by the home defence.

The move of the match saw Meridian go on to notch the winner with a one touch passing move down the right involving Collins Ugochukwu, Joe Richardson, Jermiele Johnson and Paul Hayes who put in a superb cross for RJ Pingling to control, swivel and slot his shot beyond the helpless Keeper in the 90th minute.

It was a performance that was a massive improvement on the home defeat to SC Thamesmead and gives Meridian something to build on in the new year.