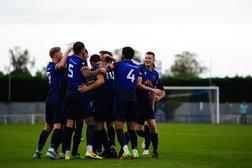 Read what Blues boss Gavin Macpherson had to say regarding our difficult derby flags with Walton Casuals tonight...

It’s been strange not having a Saturday fixture but at the weekend we worked hard on a few things, some of the squad gained valuable playing time with the U23s.
The difficult fixtures just keep coming, in every fixture so far we’ve had serious questions asked if our young squad and as we know already Walton Casuals will be no different.

The break has given us a chance to allow some of our injuries to clear up although we still do have some issues in that department. Despite our recent results it’s been difficult when you’re missing players.

Games against Walton are always keenly contested, we are away on a surface that they know well so it always works out as one of our most difficult encounters. The players will need to be focussed If we are going to take anything from the game.

Later in the week we’ll begin to look at the FA Trophy and what is an incredibly tricky fixture. Our opponents have a very good home record so it really does present us with another difficult challenge. We must concentrate on Walton for now, I hope to see you at the game.