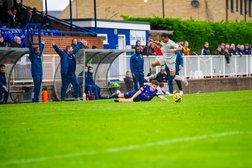 We caught up with Blues manager Gavin Macpeherson and discussed the past week.

Read what Blues boss Gavin Macpherson had to say to us after a disappointing week for the Met.

Firstly looking back to Saturday, how do you reflect on the FA Cup exit after losing 2-1 to Walton Casuals?

In some respects I thought it was a fantastic performance by the boys, to go down to 10 players after 10 minutes was difficult. What we needed was to recover, re program and consolidate but ultimately we found ourselves one nil down from the resulting freekick.  We started poorly and paid the price but I have to look at the positives, the second half was full of spirit and character and we deserve something from the game. I thought their keeper was excellent, you always need a bit of luck in the FA Cup, I wish Walton all the very best in the next round, I hope it’s their year in the competition.

A trip to Swindon-Supermarine on a Tuesday night was always going to be tough. How do you reflect on the defeat?

Again, huge amounts of positives but ultimately the result is all important and we’ve come away with nothing. I thought we outplayed them for long periods but I have to acknowledge we showed naivety at times, an experienced side like Swindon are always likely to punish mistakes and that is what they did. We had chances and were on the receiving end of a refereeing decision which defied logic.  
I’m more than happy with how we are applying ourselves, we’re together as a group we just need to learn lessons as we move forward.

Lots of praise has been placed on the team after the past 2 games, especially how strong we look and the style of football we play, is this something that you can take pride in?

I trust the players to play a certain way. We put a lot of work in on the training field to achieve results and we’ve come up short in the last couple of games. Praise is great but it’s results that matter, it tells me we’re not far away from where we want to be but not there yet. Myself, Jon, Scott and Dean will come together and decide how we try and get to the next level.

After back to back defeats, how do you pick the boys up for Saturdays game with Gosport? Will there be changes required?

Not necessarily, we’re very thin on the ground defensively despite best efforts so my hands are tied to a certain extent. I certainly don’t think the boys need picking up for Saturday, if anything they’ll be looking forward to a visit of one of the league favourites. We’ll be looking to improve what we do well and put right what we’ve fallen short on. We have defensive issues so it’s going to be a massive ask but we have the potential to cause problems going forward.

With no Simba and Louis, is there any need to bring in extra cover? Is there any other injury concerns at the moment?

It’s a concern but we don’t have a bottomless pit of money to bring in cover. Rudy has been injured and it’s unclear if he’ll feature so we’re suffering a bit. Junior returned on Tuesday so it’s given us a bit more resilience. A small squad has got smaller and usually the teams with depth keep their consistency in these situations. We will rely on what we have although it’s not out of the question to bring one in.

On the whole, it’s been a mixed start to the season, performances have been good, how do you evaluate the opening 6 games?

I think you’ve summed it up, performances are generally good but results are mixed. I’d rather have mixed performances with better results. We are playing our part in games and asking questions of our opponents. We now need to concentrate on how we can achieve some consistency in the results department. Games this season won’t come much tougher than Gosport so we’ll need to learn fast. I think the league is stronger than ever but we don’t fear anyone, we’ll look forward to what now is a run of tough games and see what our young squad can  do. We’re a fit group, the team is built on togetherness and working hard.