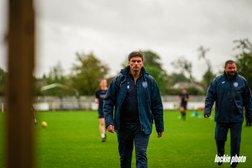 FA Cup dream over for another year...

The Blues exit this year’s FA Cup, following a 3-1 replay defeat away to St Albans City…

Macpherson named one change to the side that started Saturday’s 0-0 stalemate with the Yellows, with De St Croix coming into the side for forward Jack Mazzone, for this FA Cup replay.

As the game got underway for the first half, the home side dominated the ball, attempting to slowly work an opening against a stern Blues backline. Their early pressure did pay off in the tenth minute however, where forward Jeffers broke the deadlock with a powerful effort into the bottom corner.

Soon after, the Blues should have drawn back level in the 23rd minute, when St Albans City full back Lankshear put his body on the line to miraculously prevent a Met equaliser from finding the back of the net following a corner.

Just seconds from the half time whilstle, the home side doubled their advantage through a powerful header by Jeffers, his second of the game, proving to be a huge blow to the Blues who now had the tough task of coming back from a two goal defecit in the second period.

As the second half kicked off, the Met started to posses more of the ball, looking to find a way back into the game. An Ollie Knight free kick in the 54th whistled just wide of the near post, before super sub Mazzone provided the Blues a lifeline, with a powerful header into the bottom corner, following an excellent delivery down the left flank from Ollie Knight.

Unfortunately for the Blues, they were unable to capatilise on Mazzone’s strike and find an equaliser, with the home side dealing a final blow in the 79th minute, in the form of a close range strike from Baton that reinstated their two goal advantage.

The final whistle sounded shortly after, ensuring St Albans City advance into the next round and the Blues knocked out of the prestigious competition. Yet it was a courageous effort from the Blues over the two games, whose remarkable 12 game unbeaten streak had now come to an end.