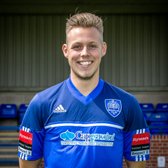 2015 kicked off with an away point for the Blues at close neighbours Hampton & Richmond Borough. The game was played on one of the poorest surfaces we have experienced this season with frequent uneven bounce and the surface cut up significantly as the game progressed. Jim Coopers side like to play neat flowing football but this was not a day or pitch for that type of game.
Jim selected the expected starting eleven with Ryan James & James Aldred both coming back into the squad on the bench. The first half contained very few scoring chances for either side but plenty to talk about as the referee became the focus, by issuing yellow cards aplenty to the Blues side. Elliot Taylor set the trend going in the 11th minute with a rash challenge near the half way line & a justified caution. Jay Lovett quickly followed in the 17th minute with possibly the harshest caution of the game as he strongly held off an opposing players challenge. This looked more like an even battle but strangely the referee decided it justified a caution and this seemed to set his mind for the game.
The Met could have taken the lead after just two minutes when a cross by Charlie Collins from the left narrowly missed a lunging header by Matt Pattison at the far post. The referee then exercised his yellow card in the 23rd minute once again by this time cautioning Rob Bartley for a sliding challenge when Ben Harris was running towards the edge of the box.
The fourth yellow card for the Met came after 40 minutes when Nikki Ahamed was harshly judged to have fouled a Hampton player on the Met right flank. The inconsistency of the cautions seemed to annoy Jim Cooper, as he quietly pointed this out to the referee with several similar challenges on Met players going unpunished.
Not a great deal of goal mouth action as the half ended goalless.

The Met were clearly given an encouraging team talk at half time as they were vastly improved in the second half. Maybe it was the refreshing Gatorade in the dressing room or the quiet encouragement from Jim but within five minutes Charlie Collins sent a right foot shot just past the post from 25 yards out. Some ten minutes later Charlie nearly got on the end of an Elliot Taylor cross that flew across the six yard box after good work by Bradley Hudson – Odoi to hold the ball up.
Just when it seemed some football may break out, the referee once again decided Ricardo Joseph deserved a caution for a lunging challenge on the left wing. Jim then made his first change bringing on Ryan James for Nikki Ahamed, and within a minute Ryan nearly found his way into the referees increasing list of miscreants. A late challenge in midfield by Ryan and the referee waved play on but strangely when the ball went out he gave Ricardo Joseph a stern talking too. It was clear to most that it was Ryan that had committed the foul but Ricardo was now walking a tightrope with the man in charge.
Against the run of play Hampton took the lead after being awarded a free kick close to the corner flank on their right wing. The ball was curled into the Met penalty area & Hampton skipper Kieran Murphy rose unchallenged from 12 yards out to head powerfully home giving Stuart Searle no chance. Jim quickly withdrew Ricardo Joseph to prevent another case of mistaken identity & replaced him with James Aldred as the Met pressed for an equaliser. Bradley Hudson-Odoi put a header from 12 yards out just wide of the post from a Charlie Collins free kick in the 75th minute.
Jim made his last change after 81 minutes bringing on Dean Bown for Matt Pattison and switching to a 4-4-2. Within three minutes the Met were level after Charlie Collins played the ball into Bradley Hudson – Odoi who was on the left just outside of the Hampton penalty area and some 25 yards out with his back to goal. Bradley rolled to his left towards the `d` of the penalty area and left the defender trailing as he drilled a perfect right foot shot into the top corner of the net giving the Hampton keeper no chance at all.
The Met now believed they could maybe get more out of this game although there was still time for Will Salmon to become the 6th Met player cautioned in a game that was never dirty. In the 90th minute the Met won a corner & Charlie Collins curled the ball into the box but it was comfortably cleared back out to the flank. Charlie once again whipped in a cross that dropped in the box but Rob Bartley had his back to goal. Defying the age old claim that defenders only defend, Rob neatly back heeled the ball into the bottom corner of the goal to put the Met ahead & cue some excited celebrations.
Somehow everyone knew that wasn’t the end of it & Hampton scored what was possibly a deserved equaliser in added time. James Aldred was adjudged to have fouled a Hampton player some ten yards inside the Met half adjacent to the centre circle. The ball was launched towards the left side of the penalty area and still the Met should have defended it. A half headed clearance and the ball fell to a Hampton player who somehow managed to turn on the ball by the goal line & lift a cross into the Met 6 yard box, over & beyond Stuart Searle. Charlie Moone was waiting to pounce and headed home from a couple of yards out to equalise with a minute to go.
The game ended 2 – 2 and on balance a fair result. Jim was happy with the point afterwards on a surface that was not conducive to neat flowing football, and against a much improved & stronger side put together by Alan Dowson.