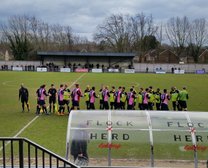 Hard earned point away at Dulwich for Blues

A great crowd saw a tight game between two of the Ryman Leagues top teams.

Jim Cooper took his play off hopefuls to high flying Dulwich Hamlet and against a side that many consider one of the best in the League. Credit to all at Dulwich for running an initiative that encouraged anyone from the LGBT community to attend the game & offering them free entry for this fixture. This no doubt contributed to the bumper crowd of 1,459……that is not a typo……over a thousand people attending a Ryman League Premier division game. This provided an excellent atmosphere for both sides throughout the whole game.

There was a slight delay in starting as the bench side linesman needed the warm up cones left by the Blues, removed from alongside the touchline……`you only have one job` comes to mind…..balls, bibs & cones!

Jim elected to start with Joe Turner up front & recent signing Billy Medlock on the bench as he has been suffering with flu for most of the week. Recent games between these two sides have been very close fought affairs & this one was no different. In the early stages the Blues defence was called on several times to prevent Hamlet taking the lead. Dulwich had a good break down the right flank with the ball played round Jay Lovett and the low cross looked destined for the forwards right foot until Steve Sutherland threw out a long leg & diverted the ball away. The resulting corner bounced around the Blues box a few times until Rob Bartley blocked a goal bound shot & Billy Crook hooked the ball away.

The Blues had their first real chance from a set piece in the 20th minute when Charlie Collins delivered his trademark quality free kick to the far post where Joe Turner rose & headed narrowly wide of the goal. In the 28th minute Rob Bartley picked up his 10th yellow card of the season and a resulting suspension when a through ball left him one on one with a Hamlet forward running towards the penalty area. Rob put a long leg out and brought down the pacey front player some 30 yards from goal….one for the team you could say.

The play was now end to end with another cross into the Hamlet box was flicked on by Rob Bartley to Steve Sutherland at the far post but he headed high over the bar from just a few yards out. A couple of minutes later & Suthers was the Blues saviour when another Hamlet break put them clean through into the penalty area. A well timed sliding tackle from Steve Sutherland took the ball off the forwards toes as he was about to shoot & even managed to win a goal kick as the ball went out off the Hamlet player.

The save of the first half came just before the break when debutant goalkeeper Craig King for the Blues, made a stunning save diving full length across goal low down, to keep out a well struck shot that looked a certain goal.

The Blues started well in the second half and within the opening minutes created what looked like a good chance when the ball fell to Elliot Taylor some 20 yards from goal however it dropped to his left foot. The resulting `shot` was probably intended for the goal but had more chance of threatening the floodlight pylon! He has obviously not been doing enough shooting practising with Phil Cramp….or maybe he has.

Billy Crook then picked up one of the harshest yellow cards I have seen for an innocuous foul just inside the Hamlet half. Billy & Nikki Ahamed were having a significant impact and driving the Blues forward from central midfield with some excellent link up play. Jim replaced Elliot Taylor with another debutant Jamie Lovegrove in the 70th minute and moved Bradley Hudson – Odoi further forward & Joe Turner dropped into midfield. Jamie had an instant impact with a shot from just outside the box that was parried away for a corner by the Hamlet keeper.

The Blues were having a good period & another great chance created in the 75th minute when Joe Turner ran through with the ball & laid it off to Bradley Hudson – Odoi who played it in to Jamie Lovegrove. On this occasion Jamie missed his shot completely & the ball ran out of play.

In a finish that was reminiscent of a cup tie, Hamlet then had the better of the closing five minutes creating several chances that needed some resolute defending from the Blues back four. In the 85th minute Craig King capped his debut with a second stunning save after a cross to the far post was volleyed towards goal. He blocked the powerful shot & as the forward closed in to finish he dived across goal and onto the ball on the goal line.

No goals but plenty of excitement for the home crowd that was no doubt boosted by the travelling Blues support…………………..A good point against a very well set up side that is highly likely to be in the play offs at the end of the season. One of my favourite grounds to visit & a very warm welcome from all at Dulwich Hamlet. If we are lucky to make the play offs it would be a cracking game if we were to face Dulwich.

Man of the Match: Steve Sutherland