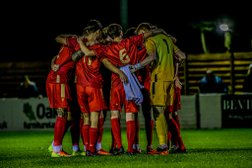 A difficult defeat to take for the Blues

With 4 players unavailable more changes were necessary as Met faced Swindon who are fast becoming their bogie opponents. Starting with a 3-5-2 formation for the first half hour Met were without question the better side playing fast flowing football and creating chances.

A repeat of their cup exit 4 days ago looked on the cards as opportunities were spurned. Then on 29 minutes the home side went ahead when a cross from the left was not cleared and fell nicely the busy Kotwica who made no mistake with a shot across Rhys Forster into the far corner for 1-0. Met could feel hard done by to go in at half time one goal adrift.

From the restart Met pressed hard but on 47 minutes a break out from the home defence saw the ball carried 60 yards before being slipped to Kotwica to run home and drive the ball through Forster for 2-0. Met responded well and finally got some reward for their excellent play as Jack Mazzone played in Ollie Knight who finished decisively for 2-1. With Met pressing at every opportunity the game became very open with chances at both ends. Met changed personnel and formation to 4-4-2 at 70 minutes but still were unable to break the home defence and came away with their first league defeat of the season which was hard to take given how well they had played.