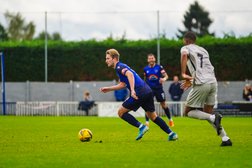 Blues bounce back with dominant performance

A Mazzone double and aheader from new boy Shroll claims all 3 points for the Blues...

Blues returned to imber court off the back of a midweek defeat to Swindon Supermarine to face an on form Gosport Borough.

Some great early play by the met saw them grasp an early lead after a fantastic ball by Blackmore reached the foot of De st Croix who pulled it across to Mazzone who placed in the corner.

It was the home side that had the better of the chances after a free kick from Knight met the head of Mazzone who was denied his second by a finger tip save by O'Flaherty.

The visitors failed to break through a dominant blues back line after managing possession but not creating anything threatening to Forster.

After some controversy the blues were awarded a second to Ben Shroll on his debut on the brink of half time as his cross just creeped past the line before being claimed by O'Flaherty.

Gosport began the second chance brightly after a controversial corner was awarded to the visitors that saw Wooden finish from close range inside the box.

Another chance went by for the blues after a through ball fell to Mazzone who was one on one with the keeper but timed his chipped shot wrong and it was a comfortable catch for O'Flaherty in the end.

The visitors had their biggest chance to even the game up after an unexpected shot from thirty yards out was unleashed by Tarbuck who struck the inside of the post.

The met struck late on with a second from Mazzone who received a perfect delivery from De st Croix to catch his half volley beautifully to beat the keeper.

The blues remained dominant to take home all three points after a solid performance.