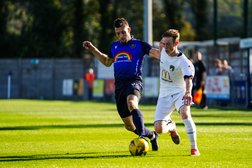 Performance of the season so far, as Blues go 4th

Shroll and Blackmore fired home for the Blues, as we left Somerset with a huge 3 points!

Things did not start well for Met with their coach being delayed twice by incidents on the journey from London resulting in their arrival at the ground at 2.30 and a consequent shortened warm-up period with the game kicking off 10 minutes late. Taunton, previously unbeaten in both league and F A Cup, started like a team in form.

Met had Rhys Forster to thank for keeping things level with a fine leaping save from a Sullivan header. After the early scare Met steadied with new central defensive partnership of Junior Edstal and Arsen Ujkaj controlling things at the back. On 15 minutes Met were unlucky not to go ahead when Ricky Johnson hit the post attempting to convert a cross from Ollie Knight. But on 24 minutes Met deservedly went ahead when right back Ben Shroll turned up on the left side of the penalty area to deftly slot home a neat pass from Ujkaj for 1-0. Met controlled the remainder of the half and were well worth their lead.

Almost from the restart Met were unlucky not to go further ahead when an under pressure defender managed to hit his own keeper with an attempted clearance with the ball ricocheting on to the bar and away to safety. But Met got their due rewards on 57 minutes when Max Blackmore scored with a very clever goal sending the keeper the wrong way before slotting home from close in. A real fox in the box goal.

Taunton were now resorting to a long ball game with substitutions to compliment their endeavour. The game was now attritional as the home team applied mote pressure to get back into the game. Met looked comfortable despite Taunton’s efforts until 85 minute when a trip on danger man Holmes brought a penalty for the home side which was duly thumped home by Howe. Despite intense pressure the Met held out with the game ending, as it began, with Forster making an important save by holding on to a thunderous drive hit from close range straight at him.

A thoroughly deserved win for Met which lifted them to 4th.