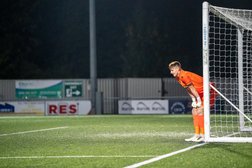 A dissapointing performance for Macpherson's side as Walton make it 2 wins from 2 over the Blues...

Following their heavy defeat 3 days earlier the home side were bolstered by the addition of a number of loan players for this local derby. By comparison, The mood of Met supporters and players matched the dank miserable weather. Met brought with their accustomed aversion to playing on 3G while the hosts prospered on the wet zippy surface.

After a frenetic first 15 minutes, things settled down with both sides competing well. And as the 0-0 half time score suggested it was a pretty even game. Met lost Max Blackmore aft.er 40 minutes with an ankle injury which did not help their cause. The second half belonged almost entirely to Walton with Coombes scoring twice and a 90th-minute penalty from Lamont rounding off the scoring. The only bright moments for the Met were two goal line clearances from efforts by Jack Mazzone and Sam De St Croix both immediately following each of Coombes’ s goals. Had either gone in we might have had a different game but 10 days without a game and the dreaded surface found Met wanting.

A much better performance will be required if Met are to get anything from their FA Trophy fixture away at Felixstowe in 4days time.