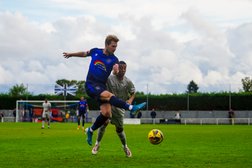 Blues end first part of season on a high

With the pitch in good condition despite all the recent rain on the first cold calm evening of the season the two exiles from the Isthmian League locked horns, both seeking to recover from their exit from the FA Trophy 3 days earlier.

What the game lacked in precise constructive football it made up for in endeavour and pace as both teams pressed hard to find a goal. Met survived when in the 11th minute Louis Birch cleared off the line as Hendon looked certain to score. Hendon’s right winger Lucien causing real problems with his pace. But then it was Met’s Ollie Knight who went close, latching onto a pass from Jack Mazzone, the wide man’ s strike hit the angle of the post and bar with Hendon’s keeper stranded. Knight had a further good chance breaking in from the left but his strike went straight at the keeper. So 0-0 at half time but with plenty of entertainment for 159 hardy souls watching their last live football for a month.

Four minutes after the re-start Met went ahead with the best move of the night when Sam De St Croix burst down the right wing laying the ball delightfully into the path of Jack Mazzone who calmly slotted his finish past the advancing keeper from 10 yards. Despite increased pressure from Hendon Met defence held firm but had Rhys Forster to thank for one outstanding save low down to his left 3 minutes from time.

The result takes the Met into 5th place and above their opponents as the league now goes into a hiatus leaving the authorities now to determine whether the season can be completed for non-league football.