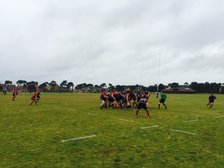 Mildenhall and Red Lodge RUFC began the rugby season with their first game at home to Cottenham Renegades, Saturday 10th September. MRL RUFC have welcomed a number of new players since the end of last season and their determination and passion was clear by scoring the first try of the game in the first five minutes (Carolina Jones).

By half time, Cottenham’s experienced team and certain individuals had made a big impact on the game and unfortunately, Mildenhall and Red Lodge were down. A number of knock-ons by Cottenham enabled MRL to run with the ball and Gavin Clarke was successful in clearing a dangerous ball away from the try line in the last quarter of the game.

Ben Hewitt had a fantastic first game of his career and made some outstanding tackles. Although sprits were dampened towards the end, MRL showed great enthusiasm and played hard up until the final whistle.