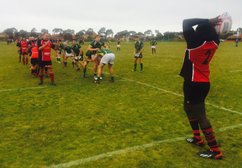 Pick yourself up and try again!

From the starting whistle, it was clear MRLRUFC have made dramatic improvements in training leading up to the game.
The first 20 minutes, Saffron Walden struggled to get off the starting grid and get some points on the board. Possession was mainly in MRL hands. However, 27 minutes in and Saffron Walden were two trys and one conversion up.

Some majestic tackles by Gav Clark and Dom Gregory kept the opposition from progressing the score too far before MRL escaped a clean sheet lose 20 minutes before the end of the game. The second half Mildenhall red lodge struggled to keep up with Saffron Walden’s younger players who passed the ball wide.

A few injuries to MRL and an inconsistent ref gave saffron an away win with 5-64.
Watch out Ely...we're improving fast!