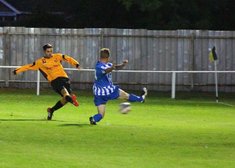 Turner at the Double

Mildenhall entered the game without the cup tied Sam Parkinson and missing Judge, Harvey,Blake, Minns and McCabe through injury/illness. Joe Isaacson was not included due to the FA Youth cup game due Thursday, meaning Mackney returned in goal and a first appearance on the bench for the season for Josh Pope as he begins his return from injury. A blow was seen as Ford tweaked his groin during the warm up which meant he would be able to take no part in the game.

Mildenhall started the game on fire and Nurse had already had a shot well saved before Turner opened the scoring. Turners good movement saw him collect the ball from Cooper 30 yards out and after controlling, he expertly lobbed the ball over the keeper with a well taken volley after 4 minutes for a perfect start.

The Hall were dealt a blow when Robinson caught his studs in the turf meaning a calf pull just before the goal and he had to be replaced by Murkin after 5 minutes. This did not disrupt the teams good start and the flowing football continued. The second goal quickly followed when Cooper played in Turner superbly and he slotted home to double the advantage.

Hall were now on top but Murrrays slip on 15 minutes allowed Basset space in the area but his shot was superbly saved by Pope.
Nurse then skimmed the bar after 19 minutes with a header following Patersons corner. Eynsbury then had a period of possession resulting in some long range shots off target and some crosses flashed across the area. Foster was booked for knocking the ball away whilst other strong challenges on Hall players seemed to go unpunished as the half drew to a close.

Eynsbury started well in the second half changing shape and tactics and continued to drive forward. The Hall always looking dangerous on the break continued to be a threat when moving forward and Cooper, Turner and Nurse all had good efforts saved. Mackney in the home goal was looking composed. However a rare slip saw a shot spilled for a corner which was followed up with a superb save tipping over a header from the corner.

Mildenhalls defence, Marshalled well by the superb Murray and Werthmann, assisted by Sterecki and Paterson and the hardworking midfield looked impenetrable and Eynsbury for their possession could not find a way past the Halls rearguard.

Murray had to be replaced due to injury on 78 minutes which meant a reshuffle, Burroughs moving up front and Nurse returning to his familiar midfield role and Cooper dropping back into defence.

Mildenhall looking to see the game out had to make a final substitution as Murkin was injured and needed to leave the field. This led to a first appearance of the season for Pope, in the not so familiar position of centre forward, something which the supporting Maddos found to cheer.

The game finished after 6 minutes of injury time for a deserved victory after an impressive start and intelligent defending.