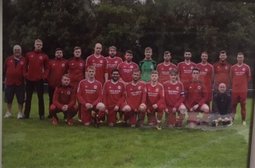 Mill Hill started the new year with three hard earned points, 3-0 sounds a convincing win this was no easy game; the visitors came out playing some delightful possession football and Matty Bulcock soon put the visitors ahead but the home side dug deep and played themselves back into the game without really creating goal scoring opportunities HT 0-1.
The second half was more even and end to end football from both sides and the second goal was going to be pivotal in this game and on 75 minutes Mo Nabeel turned the defence with a jinking run before being brought down Scott Stirlin stepped up to despatch the resulting penalty giving the visitors valuable breathing space before Anthony Oliver made the game safe on 83 minutes with a opportunist strike to make it 3-0.
Barnoldswick Town are a very good hard working side and will cause plenty of teams problems through the season
Share via
FacebookTwitter
https://www.pitchero.com/clubs
Recent news