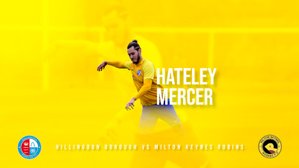 The Robins are in League Challenge Trophy action this Tuesday as they travel to Hillingdon Borough for the quarter-final.

MK are back to winning ways after a good results away to London Tigers on Saturday, a 3-0 victory which stopped a succession of winless games.

The squad will be keen to build off of that result and start a run similar to the unbeaten streak that they went on earlier in the season.

And what better way to embark on a new run of form than to progress through to the semi-finals of the cup and get a chance to get closer to silverware?

The League Challenge Trophy represents the only cup competition left for The Robins this season, and barring a stunning run in the league it may be their only chance to win a trophy.

The squad will be familiar with their surroundings and the opposition, having already come up against Hillingdon Borough away this season, a 2-2 draw back in September.

In team news, both Liam Smyth and Carl Tappin are cup tied and miss out, alongside Mason Spence and Vinny Shrieves who are suspended.

Defender Scott Dummett is available for selection having served his suspension at the weekend.