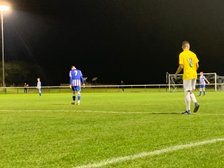 Reaction - Shrieves: "We must work harder"

Milton Keynes Robins lost for the first time in eleven matches on Tuesday night and manager Terry Shrieves was disappointed with the manner of the defeat.

The manager felt his side need to get their feet back on the ground again, after maybe becoming complacent after their recent run of good form:

“We’ve got a big opinion of ourselves and we’re not putting in the effort. Any level of football you play at you need to put in the effort and at the moment we’re not working hard enough.”

Shrieves felt it was a trend that carried over from the draw at the weekend, explaining:

“You have to work and that’s why you see the two results, at the weekend and now, that’s why they turned out like that.”

Despite that, Shrieves didn’t think the Ampthill comeback at the weekend effected his players, and rather thought the defeat was caused by the comfortable mentality the winning run created:

“We’ve had a bit of an attitude now where we think we’ve got a divine right to do whatever we want to do.

It’s all down to working hard enough and competing, our back four were always under pressure, theirs never was, we gave their forwards too much time and didn’t work for each other enough.”

Looking forward to the weekend, Shrieves was keen for his squad to rethink their approach, and take everything back to the simple way:

“We have to go back to basics, work on our shape and get our shape right, I don’t know if some people have got their feet under the table and think they’re better than what they are.

This is South Mids Division One and if they were better than what they are they would be playing at a higher level, simple as that.”

The Robins make the trip south to play Sandhurst Town on Saturday in the Berks and Bucks Senior Trophy, an opportunity to get back on the right track and progress towards silverware.