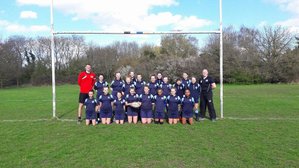 Rugby Development Officer Dan Pearson has been working with the PE Team at Sir Thomas Fremantle School in Winslow since January 2017 after meeting Miss Zoe Coll at a girls schools event in Aylesbury.

Rugby at Fremantle was just taking off, with the PE department very keen and active to move forward with it. With Zoe Coll having joined Buckingham Ladies on the back of using the RFU initiative of getting more female PE teachers as coaches, Fremantle have a PE teacher who is passionate about rugby.

The plan was to work with the girls for the 1st term and then start working with the Yr 7/8 boys after Easter.

With Zoe, Dan and Ben, from MKSET, joining the rugby ranks, training was going very well for the girls in the first 6 weeks, in which all of the girls who were being worked with having a thirst for knowledge and wanting to develop. This lead into the girls first official match on home soil, in which they took on a good Royal Latin team, and narrowly losing, but putting in a fantastic team performance.

Working with the boys since Easter, it is clear that the individual skill sets needed are of a good standard and so in training everything has been working on match play and learning through the game. The boys have thoroughly enjoyed it and are looking forward to taking it forward after the Summer break.

With Dan continuing to support STFS throughout 2017 and into 2018, the girls have gone from strength to strength. Several girls are now joining local rugby clubs, with Buckingham getting the majority of the benefit from the work Dan and the team has done.

Testament to the work that has been done, 2 of the girls have been selected to represent Buckinghamshire county U15s squad.