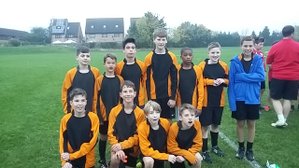 Denbigh School holds a very strong link for Dan Pearson, who went there from Year 8 to Year 11 and captaining the side throughout.

With a great PE department, full of experience and knowledge, it has been a great experience for Dan to go in and work with the payers.

Mainly focusing on Years 7, 8, 9 boys during lesson time, it was a very mixed bag for ability and experience in rugby. Some of the boys had been playing club rugby for local clubs for years, others had played tag rugby in middle school and other players who had never seen or held a rugby ball at all.

The pleasing part of working with Denbigh, is that as a school they will always turn up to fixtures, take part in tournaments and always show a never give up attitude.

Great work Denbigh, hope to work with you again in September

MK also awarded Denbigh with their own personalised rugby balls, with a mention for club legend Paul Gannaway, who had held many positions in the club from 1st team captain to club captain.