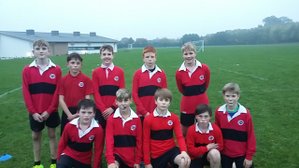 With Shenley Brook End School a stones through from MKRUFC, it has made logical sense to work closely with SBE throughout 2016/17.

Dan was able to go into the school for the first term, trying to develop rugby and get it started properly at the school. Targeting the Year 7 age group, 30+ players turned out for the after school rugby club, which is a fantastic number to have. Although no fixtures were played, the players trained and played very hard.

We look forward to working with SBE again next academic year

MK Community team have continued to support SBE in their rugby adventures and with Neil Mangan also arriving at SBE, rugby has developed hugely with teams being represented in Yrs 7, 8, 9 as well as 6th form (7s).

It has been a good year with with boy and girl in year 7 being taught rugby in some capacity. Several of the players have joined the MK ranks with the U12s having the biggest benefit from the work. The Yr 7s also need a special mention as they not only were competitive in matches, they won their last match against Hazeley School. Well done boys

We are looking to continuing the support next year.