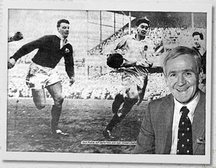 Originally, Wolverton Rugby Club was founded in the mid 1870's and carried on until the First World War. It was then left in limbo until some time after the Second World War. The Club was reformed on 22 January 1958 when the Scout Hall in Wolverton was hired for a mere 7/6d (37 V2p). A number of people attended the first meeting, thus forming the Wolverton Rugby Club. A committee was formed and three games arranged for the end of that season. Shirts were scrounged from various sources and dyed black. The next season, the Club had a pitch and posts supplied by the Council in the Wolverton Recreation Ground, with changing and bath facilities in the Railway Works Baths. Teas were taken in the Crauford Arms, which was also the Club's headquarters.

Eventually proper black shirts with white collars were donated by Vice-Presidents after much fund-raising, and it was even possible to go away with fifteen players! (Previously, at one match, a coach driver and two spectators had to be dragged onto the pitch at Old Dunstablians to make up the team.) In 1965, Hodges Furze, the allotments at the back of Windsor Street in Wolverton, were leased by the Club from the Radcliffe Trustees, and Marstons brewery loaned the Club some money. The land was ploughed, seeded, mole drained and stones removed to make the new grounds. A second-hand hut was purchased and fitted up with changing rooms, bath, toilets and, of course, a bar.

Jeff Butterfield was then asked by W H Weston, the President and former England International, to perform the official opening on 27 March 1968. At this time, Milton Keynes was just a village, but there were rumours of a new city being developed, so the Club had to think again. Jeff Butterfield became President, and held that position until he sadly passed away in May 2004. The name of the Club was changed in 1974 to Milton Keynes in the light of the development of the new city, and a new ground was provided in Greenleys. Once again the Marstons brewery came up with a loan to build the current clubhouse with help from a sponsored run to Twickenham, where our lads were pictured on TV handing over the match ball for the All Blacks game in 1973.