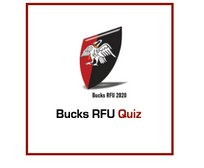 Bucks RFU have put together a quiz for our young warriors, with a County hoodie as the prize.

Please read all questions CAREFULLY and email your answers to buckinghamshirerfu@outlook.com by 12 noon on Friday 1st May.

Bucks RFU will list the correct answers on the Bucks website (www.bucksrfu.co.uk) and announce the winner by 5pm on the same date (having been randomly drawn from the correct replies)

The prize for the winner of this quiz, is a Bucks RFU Hoodie.

Q2.
What was the highest ever winning score for an England team? (1pt)

Q3. (2pt)
(a) Which player currently holds the record for the greatest number of England playing caps?
(b) What colours appear on a current England rugby shirt (2pt)

Q4. (1pt)
What is the post code of your rugby club and what is the name of the club Chairperson?

Q5. (1pt)
What is the name of the most recently formed rugby club in Bucks?

Q6.(1pt)
Which is the oldest rugby club in Bucks?

Q8. (1pt)
The RAF defends the UK from the air, what do the letters RAF stand for?

Q9. (3pts)
(a) Which rugby team is named the Pumas?
(b) What colours are their home shirts?
(c) What is the capital city of that country

Q10. (2pts)
(a) Which famous England fly half began playing club rugby at Farnham RFC
(b) What year did that person win the BBC sports personality of the year?