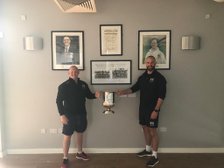 What an achievement!! MK seniors have been awarded the Paget Cup for having the highest percentage of matches won throughout the 2019-20 season.

The Paget Cup was first awarded back in 1910 with prestigious winners such as Northampton Saints!

The trophy can be awarded to any club in the Northampton Alliance and District area and with 88% win percentage for MKRUFC, its the icing on the cake for the players and coaches after a great season in both the league and the cup.

Well done to everyone involved, another great achievement!