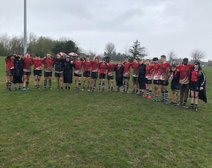 Congratulations to our U16s who have won their East Midlands league

Congratulations to the players, coaches, managers and parents of the U16s as they celebrated being crowned champions after a fantastic match (15th March) against Northampton Casuals.

As U15s, MK won the OBB League 3 last season, and after moving to East Midlands this season, they have continued their success and won their league again this season.

It will be a very interesting time for the U16s as they move up to join the colts next season and pit their talents against other local sides.