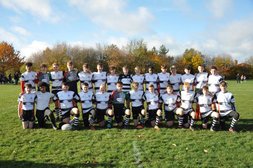 Bringing out the positives in defeat

City approached the game with a positive frame of mind, a squad of 24, including some new recruits, on a sunny and warm December morning!

To give everyone game time a number of planned substitutions and experimental lines ups were the order of the day. R&H started with more focus and took advantage to score two unanswered tries in the first half. Callam got some game time a loose head and played well until taking a knock. Liam harried and pressured well at scrum half. The forwards competed well in the set and the loose but often found themselves on the wrong side of the ref and penalised – a pattern that was to continue throughout the game. Tristan put in some good tackles and made some strong runs and Aiden had a solid half on the wing making his tackles and running out of defence.
Michael linked well with Jack and Mitchell who had good games in the centres running the ball strongly and tackling well in defence. Harry, Franco and Bailey put in some crunching tackles supported by Tyler, Matt and Jordan who all competed well in the loose.
In the second half the new back line consistently threatened to break loose, regularly taking the ball past the gain line. Following a mazy run across the field from Jake, Darius gathered the ball and drove over from close range.
With the pack starting to win regular ball Connor was able to bring the backs into the game. A great clearance kick from Eddie was expertly followed up by Alex. Quick ball from the break down gave Eddie the space to make a break and use his pace and strength to score, his conversion coming back of the post. With the scores all level City could feel the game turning, despite the penalty count against them steadily rising. Some good handling in the pack, direct running from James, clearing out by George and Aiden the ball found its way to Jake who crossed the line for City’s third score.
With City in the ascendancy the ref reached for yellow and the game turned. Despite some resolute defence with Tom, Dan and Fabien putting in some strong tackles at the gain line, R&H crossed for a converted try to take a slender two point lead. Under continued pressure City ended up giving away another try, which, despite some valiant runs and inter passing they could not answer.
From the coaches point of view there was lots of positives, our defensive systems worked well, tackling and competing for the ball at the break down was good. At times we dominated in the rucks and mauls and the scrum more than held its own. Most impressive was seeing the back lines moving up and tackling at the gain line. Importantly it was great to see everyone play for the team and keep their heads high in challenging situations. Lessons learnt today will stay with the squad and help in the future.
Share via
FacebookTwitter
https://www.pitchero.com/clubs
Recent news