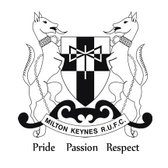 This Sunday saw a hard fought Bucks Plate game between Milton Keynes U15 and Chesham U15. Although the early play was in MKs favour the first score went to Chesham with a try in the left corner, but MK came straight back with a try from Denzel Asamoah who turned on the after burners to leave the Chesham defence for dead and score under the sticks, the conversion from Ben Morgan made things look good at 7-5. From then on the play was each way until Chesham secured the ball a breakdown and moved it quickly wide. With MK giving away a couple of penalties Chesham scored twice in quick succession. The second half was played in very much the same vein with Chesham stepping up a gear and the MK defence not knowing how to deal with it. With Chesham running in more try's and some questionable refereeing, including Josh Confue being of the receiving end of a clothesline tackling and a few handing offs to the face, all off which went unpunishe the MK Boys found their heads dropping. However there are some positives for MK to take away, those being the runs from Josh Confue, Jack Lampitt and Jack Brooks.

A tough day at the office for the MK Boys, but no shame nor blame coming from a loss to a very good Chesham side.