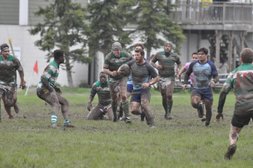 The Mississauga Blues Sr Men 1st XV kicked off their 2019 regular season in conditions most suited to a TIDE commercial that included tons of mud, torrential rains and some thunder and lightning thrown in for good measure. They dropped a tightly contested match to Toronto Saracens, 27-19.

The Blues struck first. While playing with penalty advantage, fly-half Spencer Karn put a nice chip kick in behind the Saracens defence. Kwame Sarpong got to it first but it was Karn himself who managed to wrangle the ball and touch it down for the score. The Blues had a chance to further their lead at the 10 minute mark with a penalty, but with the ball like kicking a concrete block, what would normally be a fairly easy poke fell short.

The Saracens responded with 4 trys in a row before the half, two of them coming from their inside centre who ended the game with a hat trick. The Blues closed out the first half scoring at the 39 minute mark with Timico Smith taking a lovely off-load from Alejandro Ruiz to touch it down. Jeff Hogle converted leading to a half-time score of 22-12 in favour of the Saracens.

The Saracens centre picked up his third try at the 46 minute mark, picking off the back of a ruck and smashing through three would-be Blues tacklers. Just before the heavens opened up, the Blues closed out the scoring with Kwame Sarpong touching down after taking a pass from Jacob Orvis. Hogle was there again with the convert.

With the Blues pushing hard for the bonus try, and water the equivalent of Niagara Falls crashing down around them, the lightning started, causing an early finish to the game.