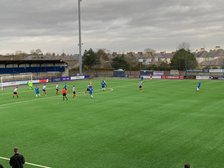 Roselea created the first chance of the match in 3 minutes when Thomson floated a free kick into the box which Watson headed goal wards but Pennycook in the Dyce goal comfortably tipped over. Dyce created their first real chance midway through the half when Leith sent a short corner into the box which Robertson just flicked past the near post. Roselea suffered a blow in 33 minutes when Watson picked up an injury and had to be replaced by Jamieson which meant a complete reshuffle in defence midfield and attack. The game burst into life in the 37th minute when McDonald sent a cross in from the left and found Declan Milne in the middle of the box who took a touch and smashed a fantastic strike high into the net from 15 yards giving McCormack no chance in the Roselea goal.

Dyce opened the second half strongly and made a couple of chances when Donald made a great run from the half way and shot just wide from 30 yards. Then McDonald sent Robertson through and only a last gasp tackle from Taylor prevented the visitors doubling their lead. Roselea managed to get back on level terms in 67 minutes when Hutchinson was pressurised into a back pass to the keeper which fell short which Sam Garnham intercepted and coolly slotted into the bottom right corner. The home side then came close when a cross from Thomson was only half cleared to Greig who’s header just went wide from 10 yards. Dyce weren’t out of it and a long ball over the top put Keir through on goal but McCormack pull out a great save to keep things level. Roselea almost went in front in 78 minutes when a great cross from Mitchell from the left was met by Jamieson but his header came crashing back off the bar. With 3 minutes left another great ball from Mitchell put Thomson through but his attempted chip over the keeper was blocked at the last minute. The last chance of the game fell to Dyce when Robertson cleverly worked his way into the box but his shot from 10 yards was well saved by McCormack. Gill came on for Thomson on 90 minutes but the game closed out with no further chances.

After a quiet opening 30 minutes the game turned out to be very entertaining with both sides intent on picking up 3 points, but a share of the spoils was the correct result. The result keeps Roselea in 6th position with a difficult fixture coming up on Wednesday night away to league leaders Banks o Dee with a 7.30pm KO and also return to Aberdeen on Saturday to face East End with KO being 2.00pm
A massive thanks to all who attended the Hospitality and made it a special day for the club!