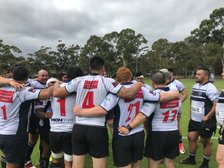 Unicorns showed why they could be the team to beat this season.

The Moorabbin Rams have suffered an opening round loss to the premiers Melbourne Unicorns on Saturday afternoon at Harold Caterson Reserve.

Unicorns fly half James Sooailo claimed a hat trick, while Taimo Matau and Maciu Nabolakasi chimed in with two tries each in the 69-0 win.

It didn’t take long for the premiers to open the scoring as they forced Moorabbin to defend on their line and took a quick penalty as Sakaria Noa planted the ball down in the 2nd minute.

That seemed to spur the Rams into gear as they got possession of the ball and made their way forward to their attacking 22, but a missed opportunity meant that the Rams couldn’t capitalise.

The visitors then scored their second when Aisea Koliavu saw an opening to make it 14-0 midway through the first half.

A repeat infringement in the ruck from Jeremy Burrill saw him have a ten minute break.

However, it didn’t seem to bother the away side as they were one man down as Nabolakasi crossed to make it 21-0.

Mona Schwagler inflicted more pain to the Rams’ defence as he crossed just before the main break.

The Unicorns started where they left off and it only took the second minute before they added another seven pointer to the scoreboard to make it 0-33.

To the Rams credit they forced the ball and the game into the middle of the park which saw them have possession and halted the Unicorns attack for the meantime.

James Soocilio scored his first of the afternoon on the 52nd minute to add another seven points to the tally.

The Unicorns then added a further two tries from Vyron Smith and Matau who made it a 52 point ball game.

Matau added his second of the afternoon and with a conversion it meant that the away side held a 59 point advantage heading into the final ten minutes.

Two tries in the final ten minutes from Sooailo saw him complete his hat trick and sealed the win for the Unicorns.