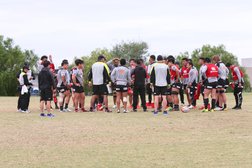 For the second time this season the Moorabbin Rams have hosted a major International team at Harold Caterson Reserve.

This week we have been lucky to play host to the Japan A team as they are currently doing a tour of Australia ahead of the Rugby World Cup.

Japan A, also known as the Wolfpack, is made up of players who are working hard to cement a place in the Japanese National team before the World Cup kicks off in September.

Wolfpack fullback William Tupou told us,“It’s a development team and we've got a lot of guys who are trying out. We are also working on finding our best combinations for the World Cup”.

Tupou started his career playing rugby league for the North Queensland Cowboys and the Brisbane Broncos, before making the switch to the 15 man code with Western Force. He now plays for the Coca-Cola Red Sparks in Japans Top League.

The Wolfpack played against an ACT team in Canberra before they arrived in Melbourne and Tupou said the more time they spend together the better understanding the team will get.

“Well our first day (at Moorabbin) was pretty much working on clarity because we played on Sunday,” he said.

“The boys played well and we got a good result against Canberra, so hopefully we can put in the same kind of effort we put in against Melbourne."

“We are just focusing on playing well and putting our game plans together.”

William was also generous in his praise of the Rams facilities saying “The fields are nice and the Club House is pretty cool. Particularly as we don’t really have Club Houses in Japan but the facilities are really nice and they're quite big.”

The Wolfpack is coached by Ex International Jamie Joseph who has represented both the NZ All Blacks and Japan's Cherry Blossoms. Since retiring he has stepped into the role of coach and is working hard to put together the best team possible for the the hosts of this year's Rugby World Cup.

Japan A are scheduled to play an exhibition match against the Melbourne Rising at AAMI Park this Friday as the curtain raiser match before the Rebels encounter with the Bulls.