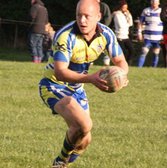 Mark Roach has appointed Craig Hookway into his back room coaching staff to help steer the Marauders in the coming 2020 Summer season.

Craig (Hooker) Hookway started is Marauders career in the highly successful junior side that was coached by Howard Robert, Roy Rafferty, Paul Robson and Jim Welbourn, Hooker soon took to the game and established himself as a strong running centre who also had a very good pair of hands.

Hooker as he’s fondly named went on to represent the South Yorkshire service area and have spells with the Doncaster and Castleford Tigers academies before an anterior cruciate ligament (ACL) injury forced him to have 18 months out of the game, on his return he quickly settled into the role of full-back and stand-off positions.

Back into the Marauder family Hooker has given supreme service as a player and recently helping to coach kids on a Saturday morning, his commitment to the Marauders is and has been second to none.