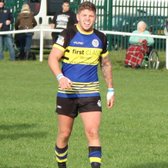 Moorends-Thorne Marauders R.L.F.C. have made a massive signing for the coming Yorkshire Mens League {2020 Summer season) in stand-off or Loose-forward Shaun Roberts.

As a junior Shaun represented the South Yorkshire service area and selected to attend the Yorkshire Regional camps, he made his open-age (Adult) debut with the Marauders at a tender age of 16 whilst being on a Doncaster RLFC scholarship.

Shaun went onto play a vital role in the Sheffield Eagles Academy side that won the Conference League South on two consecutive seasons.

Shaun has been on the radar of a few clubs in recent years which include; Doncaster RLFC, Sheffield Eagles and York City Knights, it was the latter who spotted Shaun playing in a local cup final at the Big Fellas stadium Featherstone that brought him back to the attention of the professional clubs but it was the Hunslet Hawks who won the race for his signature.

Shaun has spent the last two seasons playing for the local rugby union side Thornensians in the Yorkshire leagues but with the Marauders switch to summer rugby the opportunity to wear the Royal Blue and Primrose of the Marauders has proved to much.