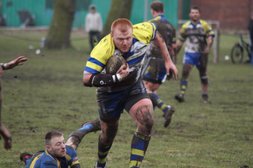 Marauders Get A Massive Up Front Boost

Moorends-Thorne Marauders are please to announce they have received conformation that Jason (Jumbo) Blanchard will be committing to the 2020 Summer season.

Jason has been one of the major go forward players over the last couple of seasons who has constantly terrorised defences with his 6-foot 3 inch, 24 stone frame and is more than capable of showing a clean pair of heels once in the open.

Affectionally called “Jumbo” by his teammates Jason is a shinning example of a guy turning up at pre-season to give the game a go, he turned up in our first summer season (2004) and has been a major player ever since.

A fit Jason is a massive asset for the club and the players around him and this got him noticed by Doncaster RLFC whom he went down to sign for before getting second thoughts because of work commitments that took him around Europe.

Along the way “Jumbo” has been a constant member of the Marauders squad and his abilities have seen him rewarded by being selected for South Yorkshire and the North of England.

His club commitments last summer saw him become a major player in delivering the clubs taster coaching sessions during the summer months to junior players every Saturday morning.