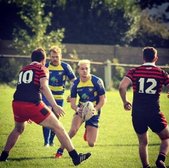 RETURNING TO THE FOLD

Having spent 12 months away playing for Sharlston Rovers in the Pennine Premier Division, Pontefract based Clayton Hopkinson has again been drawn back to the Marauders for the coming 2020 season.

The Marauders have played a big part in Clayton's development over the last few years and it’s been a pleasure to watch him grow from a young lad into a very efficient and solid adult player.

Being able to play in numerous positions is sometimes a players downfall but Clayton just gets his head down and always gives his all, last time around he served the club with distinction specialising in the full-back role.