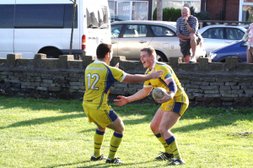 Moorends enjoy their day in the sun against Batley Boys.

Moorends Thorne Marauders enjoy an away day in the sunshine. In a pulsating end to end game there was very little time to relax or turn your back for

Being played in glorious sunshine neither side where prepared to give an inch in this Yorkshire Cup clash and it was no surprise that it took nearly 20 minutes for a crack to appear in either defence, Batley Boys where gifted the first chance in the game with Moorends coughing up back to back errors to present the home side with four consecutive sets within the last quarter of the pitch, the crack appeared as one of the Marauder shot out of the defence to allow the Batley scrum-half the chance to get around the back of the defence before sending their full-back over for a unconverted try, 4 – 0.

The try gave Moorends the wakeup call that saw them start to control every aspect of the game, constant pressure eventually allowed the hard working Alex Palmer to break the home line before offloading to Ryan Rafferty who in turn sent Shaun Roberts over in the corner, Ryan Rafferty adding the touchline conversion to give the Marauders the lead, 4 – 6.

From the kick-off the Boys were judged to have committed a dangerous tackle on Phil Cuttell, from the penalty the ball was moved quickly to the right to execute a brilliant training ground move when Chris Allen turned the ball back inside for Mark Roach to crash over and Ryan Rafferty again added the long range conversion, 4 – 12.

With Chris Allen leading the Marauders from the front it was fitting that the dangerous centre sliced the home defence wide open before sending Mark Roach on a long gallop only to be caught short, a quick play the ball enabled Steve Allen to supply the final pass for Danny Hornsby to crash over, 4 – 16.

Just before the half-time whistle the Marauders efforts on the training ground again paid off after a controlled set of six saw Ryan Rafferty hit Alex Palmer with a brilliant ball for the young second-rower to crash over without an hand being laid on him, Ryan Rafferty again adding the extras, 4 – 22.

Batley Boys came out in the second-half fired up and on fire scoring four tries within the 13 minutes of the restart, the first converted try came after only 2 minutes when the visitors where caught napping behind the ruck area, 10 – 22.

The Marauders hit back when Ryan Rafferty ran the ball on the last tackle and a long ball found Chris Allen who dummied the defence before gliding over for a try, 10 – 26.

The home side refused to die and quickly hit back with a well weighted grubber kick into the in goad area that resulted in a converted try, 16 – 26.

Two minutes later slack defence again at the back of the play ball area saw the home side exploiting the room the again add a further 6 points with a converted try, 22 – 26.

On the hour mark and with the Marauders looking back in control big Gaz Everton was stopped just short on the fifth tackle after a controlled set, on the last tackle Dave Chowings sold an outrageous dummy before diving over for a try converted by Ryan Rafferty, 22 – 32.

With the game going from end to end the referee started to become the most dangerous man on the field not only against the Marauders but also the home side as his decisions became obscured for both teams, these decision ended with the Marauders playing the last 10 minutes with a man short.

Batley soon made their numerical advantage tell when they overloaded the Marauders wide on the left to go over in the corner for a unconverted try, 26 – 32.

Moorends went straight back on the attack and forced a goal-line drop out which Chris Allen coolly collected before he danced past two defenders to cross in the corner, Ryan Rafferty adding the extra two points from the touchline, 26 – 38.