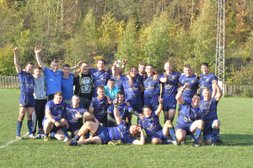 Marauders Move into the last Eight of the Yorkshire Cup

.
The Marauders opened the scoring with a Chris Allen try goaled by Ryan Rafferty, St Joes replied on the half hour with a Daz Kelly unconverted try.

St Joes came out in the second half the quickest and Liam Donlan gave the Premier division side the lead on 44 minutes with a unconverted try,
Moorends soon got up to speed and regained the lead 4 minutes later when Chris Allen broke the Joes defensive line to gallop 20 metres drawing the full-back before sending Shaun Roberts over to give Ryan Rafferty an easy conversion, 8 – 12.

From the kick-off Shaun Carver made a devastating run drawing multiply defenders to him, his quick play the ball saw Chris Allen again take advantage of the room out wide before sending Roberts over for his second try in as many minutes, Ryan Rafferty again converting, 8 – 18.

With the game going to and fro the home side edged closer to their visitors after they quickly moved the ball to the left through several pairs of hands before turning it back inside for Liam Donlon to crash over for Joe’s third unconverted try, 12 – 18.

On the hour mark Moorends pressure paid off as Shaun Carver crashed over under the post for a try converted by Ryan Rafferty, 12 – 24

With the game still being played at a cracking pace and both sides moving the ball around Ryan Rafferty gave the Marauders breathing space with a 75 minute drop goal and baring for a complete meltdown a hard earned victory, 12 – 25.

Shaun Roberts launched a high bomb for the Marauders in the last minute and when Chris Allen came down with the ball the loose-forward quickly turned the ball inside for Ryan Rafferty to dart over for a try converted by himself, 12 – 31.