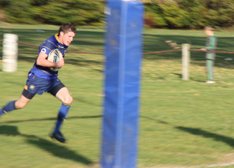 The Marauders opened the scoring after 10 minutes when hard working prop Wayne Rafferty punched through the visitors defence just before off-loading to Shaun Roberts who scurried between the posts for the first try, Ryan Rafferty adding the extras, 6 – 0.

Moorends struck again 5 minutes later with a typical training ground try, Chris Allen drew the defence before sending March Roach crashing and dancing through the Dodworth defence before finding Alex Palmer with a lovely ball as the second – rower went over in the corner, 10 – 0.

Moorends started to dominate every aspect of the game and edged further ahead when Wayne Rafferty hit the ball at pace and as he drew the defence to him he sent out a wide ball to Mark Roach who hit the gap at pace before racing 40 metres to touch down, Ryan Rafferty converting, 16 – 0.

Dodworth did show the fighting spirit they are famed for on 23 minutes after Moorends knocked on inside their own 20, from the scrum they moved the ball a couple of pairs of hands before getting stopped close to the Marauders try line, from the play the ball Brin Davis crashed over and Greg Pygot added the extra points, 16 – 6.

Moorends pace and support play had Dodworth floundering and as the play was moved quickly to the right Alex Palmer broke the defence before sending Tom Rose 50 metres for a try converted by Ryan Rafferty, 22 – 6.

Turning the screw tighter the Marauders extended their lead even further on 37 minutes when Shaun Roberts displayed his own skills using quick feet and strength to dance over for a try, 26 – 6.

Revelling in the full-back position Mark Roach picked the time to crash onto a short ball before sending Shaun Roberts for a first half hat trick of tries again converted by Rafferty, 32 – 6.

The second-half started a little scrappy as Moorends seemed to be getting penalised for every little thing in the book, however the home side managed to extend their lead again on 52 minutes when Chris Allen hit the defensive line at pace and rolled out of the tackle to crash over the try line, 36 – 6.

The game was not living up to the first half as it drifted into a stop start affair and neither side could get a roll on, Moorends displayed they are not only a young footballing side as they toughed it out and Shaun Roberts again forced himself over with three defenders in tow, Ryan Rafferty slotting over the conversion, 42 – 6.

Moorends continued to grind out a victory and Mark Roach extended the Marauders lead as the full-back ghosted through and won the 60 metre foot race to the try line, Ryan Rafferty converted, 48 - 6

From the restart Shaun Carver crashed into the Dodworth defence leaving skittled players everywhere before calmly galloping away drawing the full-back before sending David Chowings under the posts for a try, Ryan Rafferty converting, 58 – 6

The last say went to the visitors when Brin Davis crashed over for his second try again converted by Greg Pygot, 58 – 12.