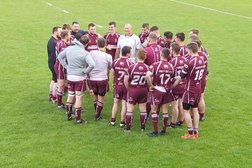 Saxons run in 5 tries to 1 in entertaining game.

Thanks to our roving reporter for this match report.

Following the summer's break the Morley Saxons looked to continue the momentum from last season and kick on against a physical Otliensians side.

Morley started the game the much better of the two sides, immediately pinning Otliensians in their 22. Despite bullocking runs from the ever angry Ted Sparks and Matty Blackshaw inaccuracies, brain farts and simple ring rust cost the Saxons the chance to take the lead. This was further compounded when the Otliensian 13 (the second largest player on their team) capitalised on a lapse in concentration to break into the Morley half. Despite being felled by a kamikaze tackle from Jordy Brereton, he was able to offload to supporting players allowing the visitors to take the lead. 0 - 5

Despite falling behind the Saxons refused to change their style of play and immediately found themselves camped within the Otliensian 22 again. Quick ruck ball and hands from Howarth and Norton fed the ball to Jordan Brereton, with a step beat described as unadulterated filth, Jordy scythed through the defensive line to score Morley's first of the day. 5 - 5

From the restart the Saxons looked to settle the play and break once more into their stride. Howarth fed the ball to McFaul, who with an audible creak of rust hips and the use of that medium/slow swing ball style of running broke the line. After running the prerequisite 10m McFaul looked to offload the ball to a more natural athlete. Enter Chris Norton, coming back from retirement, seeking to prove "he's still got it", cutting back against the grain, legs pumping, face contorted into a snarl with the sheer effort he was putting in, he will finish this try….McFaul however had other ideas mugging off Norton with a small dummy and step to pop the ball to Will Howarth who ambled over to score under the posts. 12- 5

Norton was to get one more chance. Following some defensive pressure, the Otliensian 10 spilt the ball which was gratefully picked up by Norton. Putting his all into the effort to make the line, head nodding like Churchill, hips creaking from the effort it looked like Norton would be able to prove McFaul wrong - he did still have wheels. Cruelly he was brought down 5m short of the line, but was still able to pop the ball to the poaching Will Howarth who scored his second of the day. 19 - 5

With the first half coming to a close, Morley had a scrum in the centre of the field. The call was 8 - 9 - 15 - 14, but only one pass was required. Tubes popped the ball to Noah Hawkins, who showed the standard level of terror of a man of his 6 stone frame would playing rugby set off like a scalded cat. Sprinting round the defenders faster than the evening descends when Harry brings out a speaker, Noah crossed for the Saxons' fourth of the day. 24 - 5

The second half was a far more disjointed affair, with it evident a number of players hadn't done much by way of preseason training and Morley were able to blood a number of colts who were making the step up to senior rugby.

The only try of the half came after the Otliensian 13 was sin binned for a no arms tackle. Sticking to the classics, Morley ran the timeless dummy switch pop, Howarth feeding Morgan who ran a line so naughty it's been noted by Santa, to cross over the line under the posts. 31- 5.

The game fell into even more disarray with little to highlight bar a tremendous defensive from the Saxons. The physical Otliensians side tried to breach the Morley line, with numerous one out runners. Like the defenders at Helms Deep, the Saxons weathered the storm, tackling manfully and felling the far larger opposition, forcing a knock on and bringing about the end of the game.

Whilst not a perfect performance Morley can be satisfied with the number of younger players who were able to step up and show that they can handle the rigours of senior rugby.