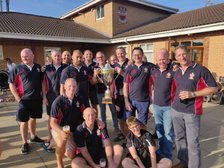 The Season Approaches, Where Will You Be?

The Spartans (Vets) look forward to a new season.

What I miss most about the game, is the changing room. The hour before and the hour after the game, unless you’ve played, you’d never understand.
Jonny Wilkinson

For the Spartans the season starts with a four team ‘Festival’ at Sandal on 8th September, a gentle introduction. Although as Friday night T‘n’P has run throughout the Summer we should be ready.

What we’re asked repeatedly and accused of occasionally is; “Is it really rugby?”

The answer of course is; “Absolutely!”

The evidence is equally clear, ask anybody who has been ‘run over’ by Warren Jowett or had a disagreement with Paul Farrar.

Yes, the pace of the game is slower, however not that much as many of the Vets played regularly for the 3rd XV, a couple even graced the 2nd XV last season when we had no game.

Do we take it seriously? of course we do (a ridiculous question really). Winning is no longer ‘everything’ but it still matters… a lot.

We train, we warm up, we have drills, we even have moves, we don’t just show up to amble around, drink beer and re-live past glories, so if you’ve considered playing but think it may be beneath you, it won’t be.
You’ll play alongside and against some very good players including ex-professional League and Union players who like you simply miss the game.

We are looking to play 7/8 games this season all against local teams starting at Sandal and finishing with an exhibition game against the 3rd XV on Friday 24th April. We avoid ‘holiday time’ and are also looking to play our home games on Friday night under floodlights.

The invitation to past players or to new players is always there, if you’re interested; even slightly, you’ll be guaranteed a warm welcome.
The banter can be a little harsh, but it’s fair… well maybe not always but it is all in good humour.

If you want to get involved or even if you’re not sure, speak to any of the Spartans or phone me direct.