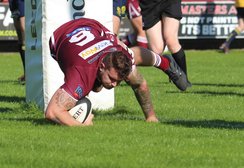 Morley scored all their points in a 7 minute spell in the first half having struggled to obtain possession against a spirited Durham side. Having fallen behind to a 15th minute penalty, it was against the run of play when Morley scored in the 19th minute. Connor Wilson's run down the stand side showed that Morley could stretch the Durham defence. The ball was then carried deep into the Durham half initially by Greg Jones and then by Noah Hawkins. When the ball was brought inside, the heavy artillery blasted the Durham defence. Steve Graham made ground and then Callum Rogers broke free to claim Morley's first try.
A sweeping move down the left involving Wilson, Ellis and George led to a 5 metre scrum. A perfect move which might have even pleased Colin Stephens saw Connor Wilson come off his wing and go straight through the centre without a hand laid on him for Morley's second try only 2 minutes later.
Morley had to wait for a full five minutes before Chester claimed the third try. Again good hands from the backs paved the way for Chester to break a half tackle and stroll through open ground to the try line. Chester converted all 3 tries and Morley led 21 - 3 on 26 minutes.
It looks odd on that the 4th try would soon follow but despite a few near misses, the score did not alter before half time.

Morley had spells of good rugby in the second half, but it was Durham who got a deserved try on 61 minutes to pull the score back to 21 - 8. However, they rarely looked like breaking through again.
Morley fell foul of the referee in the second half and along with unforced errors and problems in the set piece failed to find the elusive bonus point try.
A win is a win and Morley moved up one place to third in the table behind Bradford and Driffield.

View from the other end of the pitch.

MORLEY 21 - 8 DURHAM CITY BY CAROLINE MCHALE
For a side fielding six or seven changes of personnel from the previous week against unbeaten Morley in the North 1 East League, this could have been a match with disastrous consequences for Durham City. It was however a highly competitive affair throughout and, but for a golden seven minute period midway through the first-half when defensive concentration lapsed and Morley struck to score 3 fine converted tries, the outcome may well have been very different.
City began brightly, dominating the opening quarter in terms of territory but unable to breach a solid home defence. Their only reward was a penalty by scrum-half Paul Armstrong for a 3 – 0 lead after 15 minutes, but suddenly Morley got some front-foot possession and broke free to score from their first real attack when winger Noah Hawkins made ground on the right and the ball came inside for flanker Callum Rogers to score after 20 minutes. Four minutes later, Connor Wilson came off his wing to blast through the middle for their second try and they quickly followed it up when stand-off Mark Chester broke from a ruck after a good run by Hawkins to score under the posts. Chester converted all 3 tries and in what seemed the blink of an eye, City suddenly trailed 21 – 3 and things looked ominous. To their credit however, they quickly re-grouped with the lineouts and scrums working well and only good home defence keeping them at bay as they pressed going into the interval.
The second half, punctuated by penalties the majority of which going against Morley, proved to be a pretty even contest. Both defences held sway, and whilst City had the satisfaction of producing the only further score of the game when full-back Josh White broke up the left and winger Nathan Bushnell went over from the resultant ruck after 63 minutes to reduce the deficit, it never looked as if they could fully make it up.