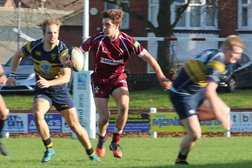 Play off against USA to determine who plays in World Cup

Canada’s Men’s Under-20 team will play the first game of a two-game series against USA U20 to determine the qualifier for the World Trophy in Brazil in July.

This game will be played on Tuesday June 4th at Shawnigan Lake School at 5pm. The second game on Saturday June 8th will be at the same location and at the same time.

Notable players include Will Percillier, who was capped for the Canada’s Senior National Men’s team this year at scrum half and Avery Oitoman at full back, who plays for Toronto Arrows Major League Rugby team.

The BC Carson tribe are well represented with cousins Frank at second row, Nick at number 8, and David at reserve hooker .

“The Qualifiers against USA are always nerve-racking affairs as so much is on the line,” commented head coach Williams. “However, we have prepared well and despite the injuries we think we have a good team.”