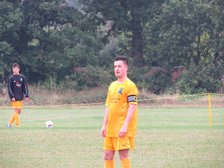 Michael Percival joins Hungerford Management Team and all at Mortimer thank him for his loyal service and wish him well.

Michael Percival "Meeka" will be leaving Mortimer and has the exciting new challenge of joining the management team at Hungerford, Assisting Bobby Wilkinson and the coaches there.

Meeka has been a loyal servant at Mortimer for over 5 years and will be greatly missed. Mainly operating down that right side Meeka was also used in central midfield and sweeper during his years at the club. Most recently he was first team captain and has always been a great club man and player.

Michael is an experienced coach with over five years at Reading and having also spent time coaching in the states.

Please join us in wishing Hungerford the best of luck and also our "Meeka" as he makes a massive step into the Conference South. May Hungerford's steady rise continue!

Meeks has said the drinks are on him whenever he sees any Mortimer lads by the way, so please wish him well !