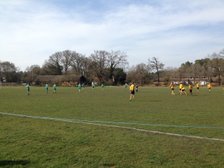 Honours even in six goal thriller

The Villagers showed great character in turning a two goal half time deficit into a 3-2 lead, but had to settle for a point.

The game began at a high tempo with Mortimer nearly opening the scoring within the first sixty seconds as Casey Warwick struck the ball against the post.

The villagers continued to set the pace, threatening in particular from a series of corners, but were caught cold by a set piece from Rovers on the half hour. A high floated ball rebounded off the cross bar onto the head of the onrushing striker, who also headed against the bar but the ball rebounded into the net off him. An unfortunate and bizarre goal to concede. 0-1.

Shortly before half time the visitors doubled their advantage after a straight ball down the middle caused confusion in the Mortimer defence and was finished cooly by the Bracknell striker. 0-2 at the break and Mortimer will have felt aggreived to be behind.

The second half started well for Mortimer as within a couple of minutes a fine cross from Casey Warwick was turned in from close range by Mike HANCOCK. 1-2. The villagers drew level shortly afterwards as a Hancock knock down was lobbed over the Rovers keeper by Casey WARWICK. 2-2 and the villagers in the ascendency.

With around twenty minutes to go a Greg BECKETT thirty yarder into the top corner gave the villagers the lead. 3-2. Unfortunately Bracknell went straight up the other end and equalised after a ball into the box was headed in at the near post. 3-3.

Mortimer continued to press forcing a great diving save from the Rovers keeper in the dying minutes, but it wasn't to be. Full time 3-3.