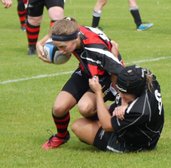 Moseley Ladies leave it late but come away with the win from their opening game of the 2012-13 season.

On Sunday, MWRFC visited Chipping Sodbury of South West 2 for a season opener. The squad of 17 arrived a good hour and a half before kick off and was greeted by the 25 of CS already going through their paces on the pitch. They clearly meant business and this was soon to become all too apparent.

Moseley lost the toss and were made to play into the breeze with a rare warm sun shining into their eyes. The first 5 minutes or so of the game were no spectacle, with both sides making unforced errors, resulting in lots of scrummaging practice for both teams. Up front, Beck Drackley was making her debut at prop, and the first few exchanges showed that she has what it takes to be a great success and become a worthy member of the front row union.

With 15 minutes on the clock, CS showed they were the more settled team and started to produce some nice moves along their backs. Good support and offload allowed them to make incursions into the Moseley 22. With 21 minutes gone, the CS centre showed good pace and feet and weaved her way through the Mose defence to score the first points of the game. Conversion missed.

The restart saw CS buoyed by their score and they showed even greater confidence in their backs play. Good defence from the Moseley backs, notably from debutant Emily Smith on the wing, helped to stifle the CS attack for the next 10 minutes. It took a clever worked move down the blindside to get CS on the scoreboard again. Conversion kicked.

It must be pointed out that at this point in the game, Moseley were not playing badly at all. Chipping Sodbury were just a little bit more urgent, played the referee to their advantage at the breakdowns, and were winning the 50/50 balls. They also had the benefit of 10 pairs of fresh legs on the touchline being rolled on and off.

The second half saw a more resolute and determined Moseley on the pitch. The CS backs started to have less impact on the pitch and their threat was being nullified. Despite this, CS got yet another score when their impressive number 8 picked and went 5 metres out to score under the posts after 55 minutes. Conversion kicked.

At this point, you’d be forgiven for thinking that the ladies of Moseley would give up and it was the start of a rout. This setback, however, seemed to be the final straw for Mose, and a yet unseen determination and drive started to expose itself. The 50/50 chances started to go their way, more tackles were being made, hands started to improve and CS were taken by surprised as at this stage they were expecting and easy final quarter.

A period of sustained pressure from Moseley saw CS start to make a number of unforced errors. With less space and less time to think, balls were being dropped and territory conceded. One such knock on from CS allowed winger Emma Shields to pounce onto a loose ball, outsprint the opposition, round the fullback and score under the posts for Moseley’s long-awaited first score of the game. Nicola ‘Broc’ Sykes stepped up to slot her first ever conversion.

CS took the ensuing kickoff. A clean catch, quick clearout and swift hands allowed centre Kerianne Meadowcroft to release Emma Shields down the wing. Again she showed the oppo a clean pair of heels and scored her second of the game, 2 minutes after getting her first. The conversion was successfully added by Nicola Sykes.

With just 10 minutes of the game remaining, CS were clearly tired and Moseley seemed more determined than ever, seeing the chance to make a remarkable comeback and snatch victory from the jaws of defeat. The Moseley forwards were now in their element, playing the hard contact game they enjoy. In her first game as captain, Steph Warner was leading from the front and turning over ball in her trademark fashion. With growing belief, Moseley used controlled phases to work their way down the pitch, sucking in the defense until sufficient space was created for Emma Shield to be released and do what she does best – outsprint the opposition and score under the posts. Broc agin stepped up to claim the extra 2 points.

The last few minutes were played out and CS realised their moment had gone. They will feel unlucky to have lost as they played some good rugby at times, but resilience and the never-say-die attitude of the Moseley team proved to be the key factors of the day.

Mentions go Nic Brown for a job well done in her first ever outing in the back row, and to new recruit Kerry McCormick, who looks certain to be a huge success with MWRFC.

Back Of The Match – Sham Begum for her tireless tackling at fullback
Forward Of The Match – Rebecca Drackley for an impressive start to her propping career.