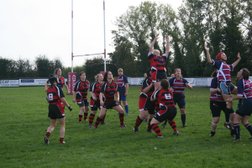 Moseley showed their grit against a plucky Shelford side to claim a well-earned last minute victory against the hosts.

It was a good match for spectators and players, with both sides attacking every opportunity but neither managing to build a comfortable lead.

Shelford opened the scoring against the run of play. A mistimed long ball to the wing, provided a steal for Shelford’s pacey full back, and it wouldn’t be her only 70 metre sprint of the game. However, Moseley kept applying the pressure, and found gaps in Shelford’s defence to set up a dash for the line for Nicola Sykes.

Shelford continued to punish Moseley’s mistakes, running in another try from a stray clearance kick. It looked like Shelford would take the lead going into the break, but Moseley were determined to have the upper hand. Moseley consistently won the line outs and secured quick ball in Shelford’s half, setting up an opportunity to switch the line of attack to take Shelford on their weaker side and also the full 7 points, for a 10 – 12 half time lead.

The second half became a scrap for both packs to assert their authority. While Steph Warner may have had a nauseating experience at no.8, Katie Mahon showed off her twinkle toes with quick breaks and strong carries that earned her Forward of the Match. This gave a good platform for the backs to move the ball, culminating with Nicola Sykes stepping the full back to dot the ball under the posts. Moseley didn’t have it all their own way and Shelford scored two in the second half to take the lead and put them within touching distance of the win with just 10 minutes to go.

In a blow to Moseley's hopes, Kath Adie who had controlled territory with her boot all match, needed to leave the field, and Moseley with no replacements went to 14 players.

Han Brown, having taken most balls against the head in the scrum, set up the Moseley pack to finally establish their dominance (eventually after 79 minutes!). They rumbled forward showing great strength and control, and Emily Hardwicke decisively secured the win with a dive over the line in the 80th minute.

Moseley travelled with a small squad and showed real character and team spirit, the final score was 22 – 26.

Thanks to the coaching team, Shammie and Laura for thier side line support.